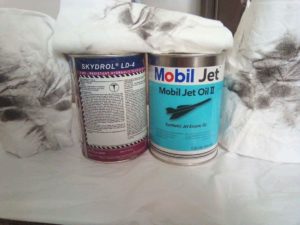 Jet engine oils must meet up to high standards. These oils have to perform over a wide temperature range: At normal cruising altitudes for jets (10-12 km), outside air temperature (and therefore engine inlet temperature) is typically -50º to -60º C, while temperatures further inside the engine can easily reach well over 400º C. A “normal” engine oil, like those typically used in your family car, cannot withstand such extreme temperature changes at all. 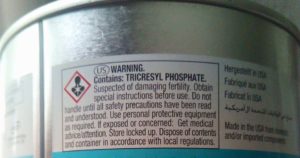 For this purpose therefore, special synthetic oils were developed, with numerous chemical additives to ensure that they will perform satisfactorily over the full temperature range needed. These chemical additives however, form a serious health problem, since they are highly toxic. Especially the so-called Organo Phosphates form a huge health risk, as they rank amongst the most toxic chemical substances known. Chemically speaking they are closely related to nerve gases like Sarin (used a.o. in the terrorist attack on the Tokyo Underground in 1995). These substances are also used in many agricultural pesticides (like e.g. “Roundup”). Direct or indirect exposure to these substances poses great health risks, as they specifically affect the central- and periferal nerve system. It’s obviously with good reason that the manufacturers display a serious warning on the oil tins to avoid inhalation of any oil fumes.

Of course the lubricant is meant to stay inside the engine and do it’s job there. To that end, oil seals are mounted around the bearings, to keep the oil inside. This appears not to be 100% effective though, even on brand new and well maintained engines. The used seals are of the so-called Labyrinth type. By design, they inherently leak (small amounts of) oil. This leakage will increase during power transients, when suddenly more- or less power is demanded from the engine (e.g. during engine start, during Take Off, beginning of the descent and the landing). As an engine ages, these seals are also subject to wear, which will gradually cause a further increase of oil leakage.

The oil that “escapes” will enter the air stream through the engine as “Volatile Organic Components”, or VOC’s. Part of that air is subsequently tapped off the engine, to be used for the cabin pressurisation and air conditioning system. So this so-called “Bleed Air” is also inherently contaminated by oil particles (VOC’s), including the earlier mentioned Organo Phosphates. This in turn causes contamination of the air conditioning pipes, and of the entire aircraft cabin interior. It is therefore not surprising that swipe samples taken in the cabin of passenger aircraft regularly show the presence of Organo Phosphates.

In so-called Fume Events there is a technical malfunction, where e.g. a Labyrinth seal fails, which causes a sudden strongly increased oil leakage. This will cause the typical “wet dog” or “dirty socks” smell that is often reported in these incidents. In such a case the pollution can be strong enough to be visible as “smoke” or “haze”. Inhalation of this contaminated air can have huge consequences for your health!