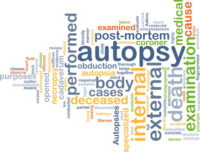 A post mortem was performed in The Netherlands in 2013 of a prematurely deceased airline pilot. A standard obduction didn’t reveal a possible cause for the severe complaints this person had been suffering during his flying career.A second obduction was particularly focussed on a possible causal relationship between these complaints and physical damage in his body. This under the guidelines of a FAA 2008 paper.Microscopy of the heart tissue, brain and the long nerves in arms and legs, revealed a surprising picture. The heart showed an active Lymphocytic Myocarditis, based on an auto-immune reaction. A normally very rare occurrence of an “inflamed” heart muscle. The brain and the long nerves of the extremities showed a diffuse structural infiltration of T-Lymphocytes in combination with high levels of IgG auto antibodies against myelin in the blood. This is indicative of an active auto-immune disease against healthy components of nervous tissues, including myelin. This will cause loss of functionality, like loss of strength in arms and legs, numb feeling of hands and feet etc. 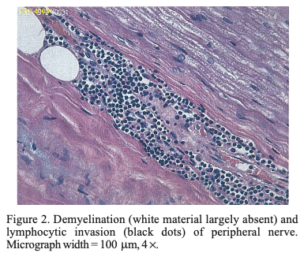 Our team in Amsterdam has seen another fourteen similar cases. Young adults in the strength of their lives, active as cockpit or cabin personnel. All fifteen in total showed identical damage to the different organs. It could very well be that there is a possible causal link between regular exposure to contaminated air in jet aircraft, a diffuse pattern of aviation related severe medical complaints and subsequent damage to the inner organs.
We need your help to be able to investigate this further. We have decided to upscale the research project to a hundred cases in total, in order to get sufficient numbers to be able to prove a possible causal link between exposure and observed chemical induced Neuropsychiatric disorders.It is very important for us to contact the family within 24 hours after an active crew member (or passenger), who has unexpectedly died.There will be costs involved for our research in Amsterdam and a fund raising campaign has started to pay for the approximately €6000 per case involved. An international protocol is available, to be handed to a pathologist working outside Europe.
You can find additional information via our website http://www.ikaros.amsterdam
or contact us by E-mail: info@ikaros.amsterdam
Michel F.A. Mulder MD